This site is intended for US-based
Health Care Professionals only.

This site is intended for US-based Health Care Professionals only.

ORENCIA is the first and only FDA-approved option for prophylaxis of acute graft versus host disease (aGVHD)1,2

ORENCIA is indicated for the prophylaxis of acute graft versus host disease (aGVHD), in combination with a calcineurin inhibitor (CNI) and methotrexate (MTX), in adults and pediatric patients 2 years of age or older undergoing hematopoietic stem cell transplantation (HSCT) from a matched or 1 allele-mismatched unrelated-donor.

HSCT patients are expected to develop aGVHD each year3

of HSCT patients develop aGVHD—particularly those from mismatched unrelated donors4

This may be due to several factors that impact overall outcome of HSCT, including a lack of donor availability or access to HLA-matched donors and related care.7

Optimally matched (8/8 HLA-matched*) unrelated donors are less available for patients of racial and ethnic minority groups in the United States (US), especially those who are Black or African American.6†

Availability of donors by ethnicity6§

‡Mismatching at only one of these loci: HLA-A, HLA-B, HLA-C, or HLA-DRB1.6

§Based on human HLA data for 10,759,087 adult donors spanning 21 US racial and ethnic groups in the National Marrow Donor Program registry in 2012.6

‡Mismatching at only one of these loci: HLA-A, HLA-B, HLA-C, or HLA-DRB1.6

§Based on human HLA data for 10,759,087 adult donors spanning 21 US racial and ethnic groups in the National Marrow Donor Program registry in 2012.6

aGVHD is an immune-triggered process that leads to immune dysregulation and organ dysfunction caused by donor T cells, including damage to the skin, liver, and gastrointestinal tract.9

The interaction of donor T-cells with an antigen-presenting cell promotes the T-cell activation necessary for development of aGVHD.8

Helping to expand the stem cell donor pool by making efforts to lower the risk of aGVHD in adults and children receiving unrelated-donor stem cell transplants is part of our ongoing commitment to drive health equity and access to our medications.

The mechanism of action (MOA) for ORENCIA inhibits T-cell activation1 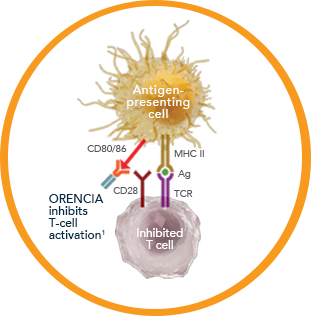 ORENCIA has a distinct mechanism of action as an immunomodulator that disrupts T-cell activation—a hallmark of aGVHD pathogenesis.1,8

The relationship of these biological response markers to the mechanisms by which ORENCIA exerts its effects in aGVHD is unknown.1

The GVHD-1 trial was a multicenter, two-cohort trial evaluating ORENCIA IV (10 mg/kg; 1000 mg maximum dose) in combination with a CNI and MTX, for the prophylaxis of aGVHD. Patients were age 6 years or older who underwent HSCT from a matched or 1-allele—mismatched unrelated donor.

In both the 7/8 and 8/8 cohorts, ORENCIA was administered as an IV infusion over 60 minutes on the day before transplantation (Day -1), followed by administration on Days 5, 14, and 28 after transplantation.

ORENCIA was studied in patients who received a stem cell transplant from either a matched or 1-allele—mismatched unrelated donor.1

The endpoints/data for the 7 of 8 cohort of ORENCIA-treated patients were an exploratory analysis.

aaGVHD-free survival was measured from the date of transplantation until the onset of documented relative grade of aGVHD, or death by any cause up to Day 180 post-transplantation.

In an exploratory analysis included in the registrational label:

When used with standard of care (SOC)* with unrelated donors, ORENCIA demonstrated efficacy as a prophylactic option for Grade II-IV aGVHD.1

*SOC for this study was CNI and MTX.

Permanent discontinuation due to an adverse reaction occurred in two (1.7%) patients due to one case each of pneumonia and allergic reaction.

GVHD-2 was a clinical study using data from the Center for International Blood and Marrow Transplant Research (CIBMTR). The study analyzed outcomes of ORENCIA with a CNI + MTX for the prophylaxis of aGVHD vs a CNI + MTX alone in patients 6 years of age or older who underwent HSCT from a 1-allele-mismatched unrelated donor.

The ORENCIA-treated group (n=54) included 42 patients from GVHD-1 in addition to 12 patients from outside of GVHD-1. The comparator group (n=162) was randomly selected in a 3:1 ratio to the ORENCIA-treated group from the CIBMTR registry to create a more robust comparison. Analyses used propensity score matching and inverse probability of treatment weighting to minimize the impact of selection bias.

Adverse event reporting at the individual level was not feasible in GVHD-2 because of limitations of secondary data collected from the CIBMTR registry. Please see Important Safety Information below.

Increased Risk of Infection with Concomitant Use with TNF Antagonists, Other Biologic RA/PsA Therapy, or JAK Inhibitors: Concurrent therapy with ORENCIA and a TNF antagonist is not recommended. In controlled clinical trials, adult moderate to severe rheumatoid arthritis (RA) patients receiving concomitant intravenous ORENCIA and TNF antagonist therapy experienced more infections (63% vs 43%) and serious infections (4.4% vs 0.8%) compared to patients treated with only TNF antagonists, without an important enhancement of efficacy. Additionally, concomitant use of ORENCIA with other biologic RA/PsA therapy or JAK inhibitors is not recommended.

Hypersensitivity: There were 2 cases (<0.1%; n=2688) of anaphylaxis reactions in clinical trials with adult RA patients treated with intravenous ORENCIA. Other reactions potentially associated with drug hypersensitivity, such as hypotension, urticaria, and dyspnea, each occurred in &lt0.9% of patients. There was one case of a hypersensitivity reaction with ORENCIA in pJIA clinical trials (0.5%; n=190). In postmarketing experience, fatal anaphylaxis following the first infusion of ORENCIA and life-threatening cases of angioedema have been reported. Angioedema has occurred as early as after the first dose of ORENCIA, but also has occurred with subsequent doses. Angioedema reactions have occurred within hours of administration and in some instances had a delayed onset (i.e., days). Appropriate medical support measures for treating hypersensitivity reactions should be available for immediate use. If an anaphylactic or other serious allergic reaction occurs, administration of intravenous or subcutaneous ORENCIA should be stopped immediately and permanently discontinued, with appropriate therapy instituted.

Infections: Serious infections, including sepsis and pneumonia, were reported in 3% and 1.9% of RA patients treated with intravenous ORENCIA and placebo, respectively. Some of these infections have been fatal. Many of the serious infections have occurred in patients on concomitant immunosuppressive therapy which, in addition to their underlying disease, could further predispose them to infection. Caution should be exercised in patients with a history of infection or underlying conditions which may predispose them to infections. Treatment with ORENCIA should be discontinued if a patient develops a serious infection. Patients should be screened for tuberculosis and viral hepatitis in accordance with published guidelines, and if positive, treated according to standard medical practice prior to therapy with ORENCIA.

Immunizations: Prior to initiating ORENCIA in pediatric and adult patients, update vaccinations in accordance with current vaccination guidelines. Live vaccines should not be given concurrently with ORENCIA or within 3 months after discontinuation. ORENCIA may blunt the effectiveness of some immunizations. In addition, it is unknown if the immune response of an infant who was exposed in utero to abatacept and subsequently administered a live vaccine is impacted. Risks and benefits should be considered prior to vaccinating such infants.

Blood Glucose Testing: ORENCIA for intravenous administration contains maltose, which may result in falsely elevated blood glucose readings on the day of infusion when using blood glucose monitors with test strips utilizing glucose dehydrogenase pyrroloquinoline quinone . Consider using monitors and advising patients to use monitors that do not react with maltose, such as those based on glucose dehydrogenase nicotine adenine dinucleotide glucose oxidase or glucose hexokinase test methods. ORENCIA for subcutaneous (SC) administration does not contain maltose; therefore, patients do not need to alter their glucose monitoring.

Pregnancy: There are no adequate and well-controlled studies of ORENCIA use in pregnant women and the data with ORENCIA use in pregnant women are insufficient to inform on drug-associated risk. A pregnancy registry has been established to monitor pregnancy outcomes in women exposed to ORENCIA during pregnancy. Healthcare professionals are encouraged to register patients by calling 1-877-311-8972.

Lactation: There is no information regarding the presence of abatacept in human milk, the effects on the breastfed infant, or the effects on milk production. However, abatacept was present in the milk of lactating rats dosed with abatacept.

Malignancies: The overall frequency of malignancies was similar between adult RA patients treated with ORENCIA or placebo. However, more cases of lung cancer were observed in patients treated with ORENCIA (0.2%) than those on placebo (0%). A higher rate of lymphoma was seen compared to the general population; however, patients with RA, particularly those with highly active disease, are at a higher risk for the development of lymphoma. The potential role of ORENCIA in the development of malignancies in humans is unknown.

Incidence rates of grade 3 or 4 adverse reactions were the same as incidence rates of all grades, with the exception of grade 3 or 4 pyrexia in all arms (9% [7/8 cohort], 10% [8/8 cohort, ORENCIA arm], and 4% [8/8 cohort, placebo arm]), pneumonia in the 8/8 cohort placebo arm (9%) and acute kidney injury in the 7/8 cohort ORENCIA arm (7%). Clinically relevant adverse reactions in <10% of patients who received ORENCIA in combination with calcineurin inhibitor and methotrexate in Study GVHD-1 included EBV reactivation.

Note concerning ORENCIA administration options: ORENCIA may be administered as an intravenous infusion only for patients 6 years of age and older. PJIA patients may self-inject with ORENCIA or the patient’s caregiver may administer ORENCIA if both the healthcare practitioner and the parent/legal guardian determines it is appropriate. The ability of pediatric patients to self-inject with the autoinjector has not been tested. ORENCIA may only be administered as an intravenous (IV) infusion for the prophylaxis of aGVHD in patients undergoing HSCT. The safety and effectiveness of ORENCIA have not been established in pediatric patients younger than 2 years of age for prophylaxis of aGVHD.